The Return of the King
directed by Jules Bass and Arthur Rankin, written by Romeo Muller, music by Maury Laws, released 1980, available on DVD by Warner Brothers

Cartoon violence by the same people who brought you Christmas! 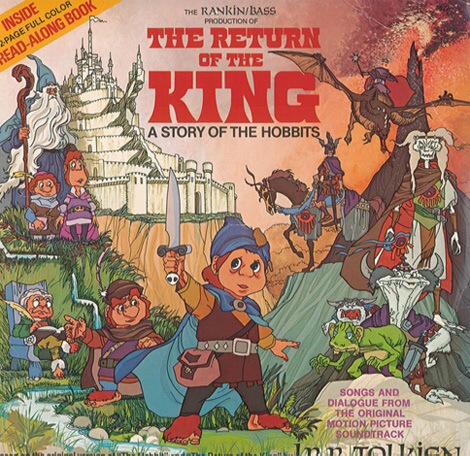 (Image thanks to Nighthawk News)

Finishing up our tour of the pre-Jackson Lord of the Rings series, we have Rankin & Bass’ the Return of the King. At the same time a sequel to the Hobbit, a sequel to the Ralph Bakshi Lord of the Rings, and also a top-down reboot of that same movie, Return of the King is a very fractured film. Rather ghastly violence, surpassing even most anime, is depicted with very cartoony characters. Stirring songs are found only scenes away from some truly terrorizing imagery. All in all, this is not the nigh-flawless masterpiece of the Hobbit but a truly ambitious and spectacular movie all its own.

Background
Stories abound of how the mantle of the finale of The Lord of the Rings ended up in Rankin & Bass’ hands and not with Bakshi to finish. Given how different the Return of the King is from The Lord of the Rings, it is easy to forget that Ralph Bakshi’s take on the Tolkien legend was a commercial success. Never the less, his sequel was never realized and Rankin and Bass got to follow-up the Hobbit.

Bringing back the vast majority of the cast and crew from the Hobbit, this film feels much like a sequel to that movie, but with a far darker tone. This is a movie about war, genocide, and supernatural extermination. And while the makers of half the Christmas cartoons you know and love handled it as tactfully as possible, there is no getting around the rampant deaths and endless carnage on full display.

Story – 3 out of 5
Unlike the Hobbit, which kept close to the original narrative, and The Lord of the Rings, which took liberties but remained mostly true, Return of the King makes severe narrative changes. Rankin and Bass actively sought to reference the events of the Fellowship of the Ring and the Two Towers as little as possible. Aside from a very brief flashback at the beginning of the film, there’s no explanation of why Frodo is in Mordor or how he got captured or how Samwise has the ring. Likewise, there’s little explanation as to who Aragorn is or why he’s returning to Gondor.
Whole characters are eschewed as well. Gimli and Legolas are entirely absent from the film, while no mention is made of Boromir. While Pippin has a few scenes, Merry is little more than a cameo.
Overall, the story is there but so many ‘small’ changes have been made, it almost feels like a different tale.

Art – 4 out of 5
Much like the Hobbit, the art in the Return of the King is rich and gorgeous. The backgrounds and architecture are beautifully drawn and the character art is distinctive. There is some monotony to the backgrounds, especially in Mordor but that seems to be more a stylistic choice than a flaw in the attempt.

Animation – 4 out of 5
While the animation isn’t amazing, it is just short of it. The characters move smoothly and naturally. There are a lot of great scenes and ambitious cinematography.

Characters – 3 out of 5
There are really only two characters in this story: Gandalf and Samwise. Both are vividly depicted and portrayed, but no one else gets nearly the screen time. Even Frodo is almost a supporting character to Samwise in this depiction of the tale, with no real character arc or development. Everyone else is just given too little time to flesh out. Aragorn has all of two scenes, Pippin and Merry disappear for whole sequences at a time, and anybody tuning in to see Eowyn will love the scene (because, man, she out-bad asses the baddest-ass that ever badassed) but there’s really no character to speak of.
The one saving grace, besides Gandalf and Samwise, is the music. As much a character as the individuals themselves, the movie has a great soundtrack and score. ‘Doom’, with the accompanying narration by Gandalf, is one of the most haunting songs ever heard. ‘Where There’s A Whip’ and ‘Retreat’ are two stirring and catchy songs that will stay with you long after the film is over.

Acting – 4 out of 5
The acting in the film is touch and go. Some of the performers are trying their hardest but just don’t seem to be hitting the mark (I’m looking at you, Casey Kasem, god rest your amazing voice). Theodore Bikel as Aragorn is doing his best but he comes across as less ranger badass and more King David. Orson Bean as Frodo doesn’t sound wounded and exhausted so much as just kind of whiney.
The saving grace to the film are Roddy MacDowall and John Huston. MacDowall plays Samwise and his performance is as distinctive as it is excellent. The performance is a little melodramatic, but what about this movie isn’t? John Huston, however, really shines as Gandalf. This is an amazing performance that underscores the white wizard’s uncertainty in his private thoughts but his need to be outwardly in control. And his scene with the Witchking (played by the underrated John Stephenson) is legendary in every sense of the word.

Overall – 4 out of 5
Were it not for this film’s pedigree (as family to the superior Hobbit and the ambitious Lord of the Rings), it might be more-easily forgotten, but between its intermittent excellence, fantastic music, and its willingness to confront the horrors present in the story, it deserves some real credit. It’s easily the weakest of the three animated Tolkein stories, but it’s still head-and-shoulders above most of its animated peers.